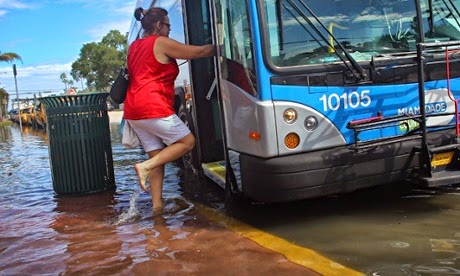 Miami – where the habitues of South Beach are used to sloshing through water at high tide – will deploy new pumps this week to hold back the waters of the King Tides, the highest annual high tides, which are projected to crest at 3.5 feet (1.07m).

Other cities are going to have to undertake similar measures if they want to avoid soggy streets in the future, the researchers said.

The report, Encroaching Tides: How Sea Level Rise and Tidal Flooding Threaten U.S. East and Gulf Coast Communities over the Next 30 Years, from the Union of Concerned Scientists (UCS), found most of the towns on America’s east coast will see triple the number of flooding events by 2030.

By 2045, those towns will see 10 times as many tidal floods – and those floods will seep further inland, and last longer, the researchers said.

But the frequency of such events is marching upwards because of sea level rise – which at some points along the east coast is more than twice the global average.

Some east coast towns have recorded four times as many flood days as in 1970, the report found.

Washington DC, which already experiences flooding from the Potomac river during hurricanes, will see chronic flooding – with 388 occurrences a year by 2045, according to the report.

Miami – which now experiences about six tidal floods a year – will also get wetter.

“Further down the coast, Miami Beach, in 30 years, would experience more than 200 tidal floods a year,” said Erika Spanger-Siegfried, a UCS analyst and co-author of the report. “ Some could affect much of the art-deco historic district of South Beach ... Without serious intervention, frequent flooding will start to disrupt daily life and change the way an area functions.”

The researchers used National Weather Service flood advisories and records from 52 tide gauges in coastal towns from Portland, Maine to Freeport, Texas to make their projections.

In nearly all of the towns, tidal floods will be a regular occurrence, they found. By 2030, most of the towns could expect to see flooding in some areas 24 times a year. Some of those towns would see 48 floods a year.

The frequency of those floods will worsen over time, the researchers said. By 2045, half of the towns can expect to see more than 100 tidal floods a year. Nine of those towns would see tidal floods 240 times a year by 2045.

Those cities can also expect to spend more time under-water. By 2045, flood-prone areas of Wilmington, North Carolina will spend more than 345 hours a year underwater.

Baltimore’s inner harbour is projected to be under water for more than 875 hours a year by 2045.

And the floods are also expected to worsen – with deeper waters penetrating further inland, and threatening more property, the researchers found.