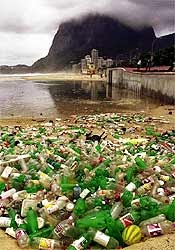 Fresh Strategies to tackle Pollution, Plastics and Climate Impacts to be Included in New Plan to Manage the World's Seas.

Athens, 1 October 2014 - Leading scientists and policymakers meeting in Athens this week acknowledged that marine litter remained a "tremendous challenge" in almost all regions of the world, with significant socio-economic consequences and clear impacts on marine ecosystems.

The three-day 16th Global Meeting of the Regional Seas Conventions and Action Plans was held amid growing concern worldwide about the threat that widespread plastic waste poses to marine life, with conservative estimates of overall financial damage of plastic to marine ecosystems standing at US$13 billion each year.

Participating experts recommended a three-tier approach to marine litter, saying that the problem needed to be tackled - not just at the regional and national levels - but at the municipal level, because in most cases it is municipalities that have responsibility for solid-waste management.

"If we are serious about reducing the amount of solid waste being dumped in oceans, or flowing through waterways into oceans and marine ecosystems, then we need to work at all levels, including with municipalities which deal with solid waste management at grassroots level," said Julian Reyna, Secretary-General of the Permanent Commission on the South Pacific, Ecuador.

On the issue of microplastics - tiny pieces of plastic less than one millimetre in size that pollute the world's waterways and seas - policymakers and experts agreed that more work needed to be done so that their physical and biological impact could be fully understood.

The global gathering marked the 40th anniversary of the Regional Seas Programme, hosted by the United Nations Environment Programme (UNEP), and provided a unique opportunity to set in motion the integration of regional seas and oceans governance into the new Sustainable Development Goals (SDGs). The Regional Seas Programme is the world's only legal framework to address the protection of the marine environment at the regional level, and is critical to reversing the rapidly accelerating degradation of the oceans.

"We are pleased to see that a Sustainable Development Goal on oceans has been proposed, and we believe that it is an important step towards setting clear indicators to measure progress in addressing the key drivers of change in oceans," said Victor Escobar, Chairman of the OSPAR Commission, Spain. "The Regional Seas Conventions and Action Plans are ready to provide technical and scientific support for the sustainable management of oceans."

"By playing our role, we hope to improve the lives and livelihoods of the people who depend on marine ecosystems for their food and incomes, and so contribute to poverty alleviation in some of the world's poorest communities," said Angelina Madete, Deputy Permanent Secretary at the Vice President's Office, Tanzania.

The experts also began work on mapping out a way forward for oceans governance over the next decade. The "visioning roadmap" covers these priority areas: extraction (living and non-living resources), pollution, governance, impacts of a changing climate, and ocean acidification.

"Making change related to ocean governance or management, especially where the issues are transboundary, takes many years," said Jacqueline Alder, Coordinator of UNEP's Freshwater and Marine Ecosystem Branch. "Having the roadmap will keep all of us here, and those that follow us, focused on the outcomes we need to achieve in the coming decades."

"It is important to have a unified approach so that regional successes can translate to global success and contribute to achieving the SDGs."