American energy use, in one diagram


How much energy we use, what kind, and how much is wasted.

Spring brings new growth, new possibilities, and, best of all, a new spaghetti diagram from Lawrence Livermore National Laboratory (LLNL) at the Department of Energy.

Every year, LLNL produces a new energy flow chart showing the sources of US energy, what it’s used for, and how much of it is wasted. If you’ve never seen it before, it’s a bit of a mind-blower. 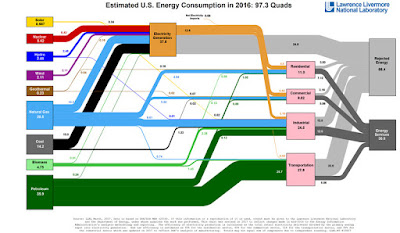 So much information in so little space! (It’s worth zooming in on a larger version.)

Before digging through a few of the more interesting details, let’s get terminology out of the way. LLNL measures US energy consumption in “quads.” What’s a quad?

Well, a British thermal unit (BTU) is a standard unit of energy — the heat required to raise the temperature of a pound of water by 1 degree Fahrenheit. If you prefer the metric system, a BTU is about 1055 joules of energy.

A “quad” is one quadrillion (a thousand trillion) BTUs. Here, according to Wikipedia, are a few things equivalent to a quad:

With that out of the way, what can the diagram show us?

We waste how much now?

Perhaps the most striking feature of the spaghetti diagram — what everyone notices the first time they see it — is the enormous amount of “rejected” energy. Not just some, but almost two-thirds of the potential energy embedded in our energy sources ended up wasted in 2016. (And note that some scholars think LLNL is being too optimistic, and that the US is not even 31 percent efficient but more like 13 percent.)

What’s more, the US economy is trending less and less efficient over time. Here’s the spaghetti diagram from 1970 (LLNL has been at this a long time): 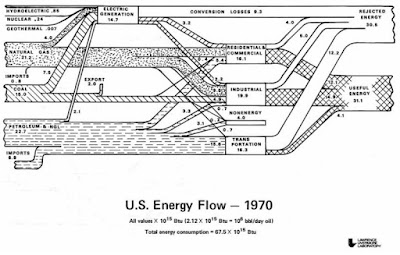 Back then, we only wasted half our energy!

What to make of this?

It’s important to put this waste in context. It is not mainly about personal behavior or inefficient energy end use — keeping cars idling or leaving the lights on, that kind of thing. That’s a part of it, but at a deeper level, waste is all about system design.

The decline in overall efficiency in the US economy mainly has to do with the increasing role of inefficient energy systems. Specifically, the years since 1970 have seen a substantial increase in electricity consumption and private vehicles for transportation, two energy services that are particularly inefficient. (Electricity wastes two-thirds of its primary energy; transportation wastes about three-quarters.)

There is loss inherent in any system that converts raw materials to usable energy, or transports or uses energy, of course. That follows from the second law of thermodynamics. And it’s true both narrowly (a car is an energy system) and broadly (a city is an energy system). It’s not possible to achieve perfect efficiency, or anything close to it.

But surely we can do better than 31 percent! Sixty-six quads is a truly mind-boggling amount of energy to vent into the atmosphere for no good purpose.

It really highlights the enormous potential of better-designed systems — especially better electricity and transport systems, along with better urban systems (i.e., cities) — to contribute to the country’s carbon reduction goals. We could double our energy use, with no increase in carbon emissions, just by halving our energy waste.

Electricity is changing: coal down; natural gas, wind, and solar up

Let’s look at some more recent changes in electricity. Here’s the spaghetti diagram from 2010. 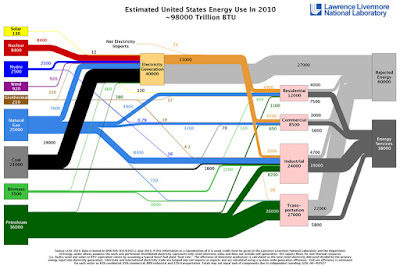 If we toggle between this one and the one from 2016, a few changes jump out.

As you can see, wind and natural gas rose by roughly the same absolute amount over the year (around 0.3 quads), but wind is growing at a much faster rate, as is solar.

In short, US electricity is slowly but steadily decarbonizing. The sector’s carbon dioxide emissions fell by 4.9 percent in 2016.

Time to focus on transportation

US transportation, however, isn’t. It is just as dependent on petroleum as it was in 2010, or 1970. Its energy consumption and carbon emissions are only rising.

This has led to a fateful intersection (as Brad Plumer reported last year): In the US, in 2016, for the first time in decades, transportation emissions are higher than electricity emissions.

This is largely reflective of the broader world’s efforts to constrain carbon emissions: Most of the successes have come in electricity. Transportation is a huge, looming, and almost entirely unsolved climate problem.

(President Trump, it’s worth noting, is busy trying to reverse what small progress the US has made on it recently.)

Watch for advocates, activists, and policymakers at the state and city level (the feds are useless right now) to begin taking transportation more seriously as part of the climate fight — to start pushing policies that can be as effective as renewable portfolio standards have been in the power sector.

LLNL periodically makes spaghetti charts for US states, most recently in 2014. Just for fun, let’s look at a study in contrasts. 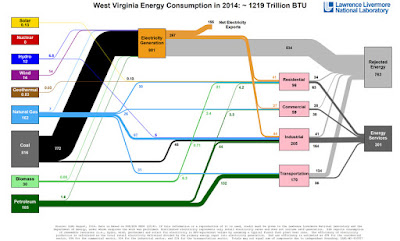 Not much of anything else, but a lot of coal! 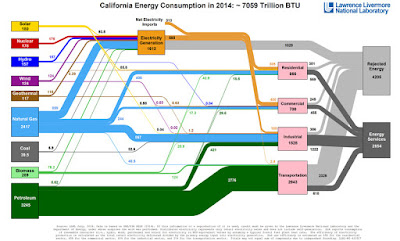 Almost no coal, lots of natural gas, and lots of oil. On the way to its ambitious carbon goals, California is going to see its carbon fight become a transportation fight. 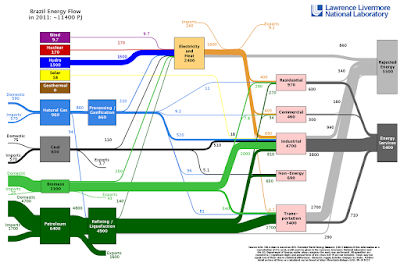