The eyes of the world are suddenly on Brazil. With the World Cup tournament coming to Brazil in 2014, followed by the Summer Olympics in 2016, there is intense interest from around the globe in this mysterious, alluring country best known for samba and soccer.

Everyone has heard about Brazil’s amazing natural resources, natural beauty and wildlife. The world’s largest river by volume — the Amazon — flows through the northern heart of the country. One of the world’s largest wetlands, the Pantanal, spreads across tens of thousands of square miles in the southern interior of Brazil. The coastal cities of Rio de Janeiro, Recife and Salvador are noted for their incredibly beautiful beaches and laidback lifestyles.

Naturally and culturally rich, Brazil continues to intrigue. Newly discovered energy reserves and creative uses of sustainable energy sources such as sugarcane have made Brazil completely energy self-sufficient, a feat achieved by very few nations in the world. Brazil’s democracy, emerged from a military dictatorship, is praised throughout South America. Yet the media is also filled with reports of civil unrest and protest in crowded metropolitan areas, and poverty is endemic in cities with huge shanty-towns or favelas that pose enormous social, economic and environmental challenges.

So what is the state of parks in this up-and-coming nation? It’s a fitting question as the world’s attention turns to Brazil. The answer, as you might expect from this very unusual country, is a bit more complex than first meets the eye.

Early in my parks career when I was managing the Patuxent River Park of the Maryland-National Capital Park and Planning Commission, I welcomed several Brazilians from Rio de Janeiro who came to the park for a tour. They were hosted by the University of Maryland’s Office of International Programs, which assisted visitors from Brazilian universities through an international cooperation group called the Partners of the Americas. The Maryland/Rio chapter of Partners of the Americas is one of the longest-standing cooperative partnerships in a program that is similar to the Sister Cities program.

The Brazilians were extremely interested in building the kinds of natural parks that we were operating on the Patuxent River in Maryland. They invited me to Brazil to work with them, and I learned so much as well as helped them. Over the years, it has been a rich and rewarding relationship. I have traveled to Brazil several times to visit their parks, and I have helped to host a number of visitors from Brazilian universities, government agencies and nonprofit organizations, and worked with a university student-exchange program as well.

I returned to Brazil last month to help celebrate the 50th anniversary of the Maryland/Rio partnership and also to participate in the signing of a historic cooperation agreement between the States of Rio and Maryland for the protection of Guanabara Bay, a large estuary that encompasses the city of Rio and is very similar to the Chesapeake Bay. While I was there, I had the opportunity to revisit a number of parks in Niteroi, a city directly across Guanabara Bay from the city of Rio. Niteroi had just introduced a new plan to establish an extensive reserve of natural parks and protected lands, so I was able to talk with park planners and government officials about their plan, and I attended a public meeting for its presentation.

Niteroi, a city of 500,000 and the historic capital of the State of Rio, has grown rapidly in the past century from a sleepy fishing town to a busy metropolitan center with an emerging middle class and substantial economic development. As one of Brazil’s ten largest cities, Niteroi is trying to shape itself into a livable, sustainable community that capitalizes on its rich culture, natural heritage and economic vitality.

The challenges are immense, particularly in terms of infrastructure. Sanitation is one of the greatest needs and one that most directly affects both public and environmental health in urban metropolitan areas. In addition, government functions such as transportation, affordable housing and planning are being tested as Brazil moves into the 21st century. Sr. Ney Maranhao, secretary of water resources and urban environment of the Brazilian Ministry of Environment, said to me, “The biggest urban challenges Brazil faces today are from a lack of adequate housing.”

Niteroi’s plan to create a connected network of natural lands and parks proceeds from a national law passed in 2000 that allowed for creation of a National System of Conservation Units (SNUC). This law enabled classification of two broad types of public conservation lands: lands that require full protection, which they call “integral protection,” and lands for sustainable use. Within the integral protection category are subcategories including national parks, biological reserves and wildlife refuges. Within the sustainable development category are environmental protection areas, extractive reserves and sustainable development reserves. State and local conservation plans follow the national model with some variations.

While much of the lowlands in and around Niteroi is developed, most of the steep slopes, hills and small mountains remain undeveloped. In fact, these areas contain the remnants of the Mata Atlantica, the Atlantic rainforest, an ecosystem thought to be more ecologically diverse than the Amazonian rainforest. However, less than seven percent of the Atlantic rainforest remains intact, and most of that is located on hillsides and mountaintops in bio-geographical islands. To give an idea of just how biologically rich this area is, the Golden Lion Tamarin monkey, an endangered primate species thought to be nearly extinct, was found in habitat just a short distance from the City of Rio. An extraordinary conservation effort is now underway to connect remnant populations of Golden Lion Tamarins.

The conceptual plan by Niteroi to protect remaining large areas of land for both integral protection and sustainable use is based on a mosaical pattern of protection that takes into consideration the highest-value lands that remain unspoiled yet still allow for development and public recreational use in less-critical areas.

During my first visit to Brazil in the 1990s, I visited a huge collection of lands acquired for a new state park, “Pedra Branca,” a park wholly within Rio’s city limits that contains one of the largest urban forests in the world. When my host and I drove up to the gates, two civil police officers stopped us at a closed chain barricade and said, “What do you want?” It was quite a different park experience than I had ever had, but as I got to know Brazil’s parks and people, I became convinced that the professionals and citizens I met were truly committed to changing that perception and reality.

On my most recent visit, Andre Ilha, the director of biodiversity and protected areas for the State of Rio, agreed that their attitude and management style had changed dramatically. In fact, he said, “We started in reverse — our parks were fortresses. Everyone was looked at with suspicion, and people came to not support the parks. Today, Brazil is in the midst of trying to change that paradigm, to get people out enjoying their parks and appreciating them.”

The results are positive. Clearly, there is now widespread public support for parks, conservation and environmental protection. However, the obstacles are daunting. In Niteroi, the public presentation of the new plan for parks and protected areas addressed one of the most critical issues stopping this plan from being successful: the “irregular occupation” of parks and public lands by homeless people. It is such a severe problem that any conservation and management plan for the parks cannot even be imagined without a companion plan to create affordable housing for those who will be displaced from living illegally in parks. Therefore, the City is also committing to build or obtain more than 5,000 units of public housing within existing communities to concurrently address this issue.

In addition, the park plan goes further than just conservation objectives. There is an important component of public safety and security also in the plan. Niteroi and Rio, due to their topography and climate, have suffered devastating rains and landslides in recent years. Axel Grael, vice mayor of Niteroi, told me that they can no longer just be reactive and pick up the pieces after devastating killing storms. They want to move into a prevention phase and utilize the protections of natural systems combined with civil defense alerts. The protected lands plan will enable a comprehensive approach to both the public safety needs as well as conservation goals. This is very similar thinking to that which is emerging in the U.S. after Hurricane Sandy — to look at green infrastructure and the ability of natural systems to provide protection from stormwater and to reduce gray infrastructure costs at the same time.

Brazil’s parks contain outstanding natural beauty, rich natural resources and really interesting management challenges. We can learn much from their experiences. To explore how your agency or state might gain from international cooperation through parks, visit Partners of the Americas. 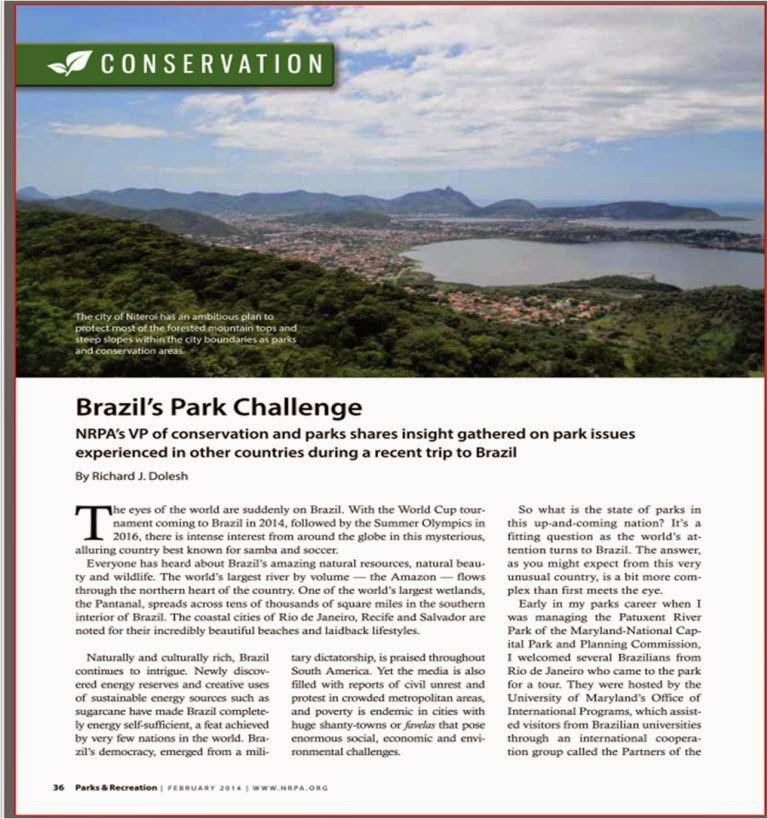 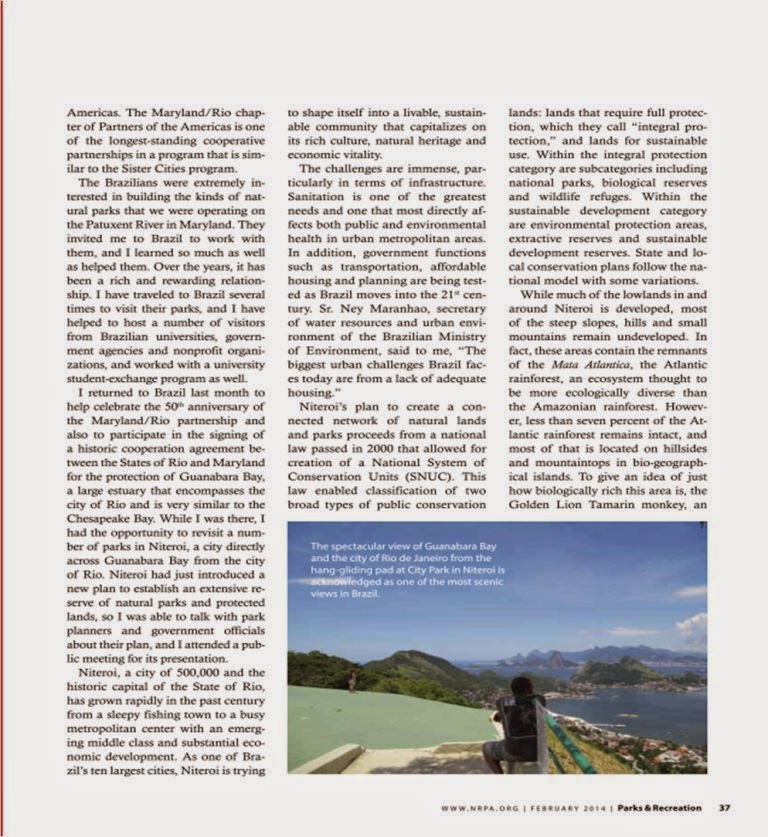 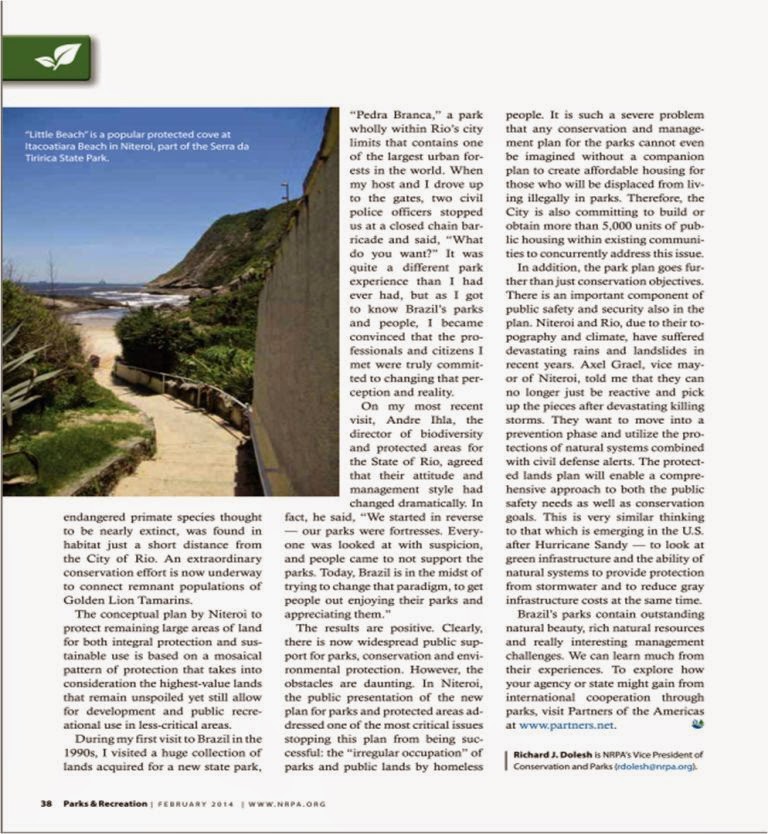