Virginia has long been coal country, but the solar power industry has been increasing its foothold in the Commonwealth over the last few years. And now, Michael Pope reports that a significant shift is taking place.

“Coal will produce more jobs I think in the long term. But we’ve had to cut back because everyone feels like it’s not worth it to use coal anymore. And I feel that there will be a time when we will have to turn back to coal to meet the demand.”

For now, though, the solar industry has more employees in Virginia than the coal industry. That’s a dramatic shift for a state that has a long history with coal. Alexander Winn at the Solar Foundation says he’s hopeful some of those jobs might move from coal to solar.

“There are efforts to retrain some coal workers, and hopefully those will continue to grow as solar becomes an increasingly large employment sector in the Virginia energy industry.” 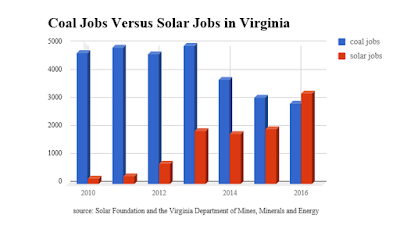 Most solar energy jobs are in installation, construction and manufacturing. Numbers from the Solar Foundation show that the industry grew by about 65% over the last year alone.

This report, provided by Virginia Public Radio, was made possible with support from the Virginia Education Association.