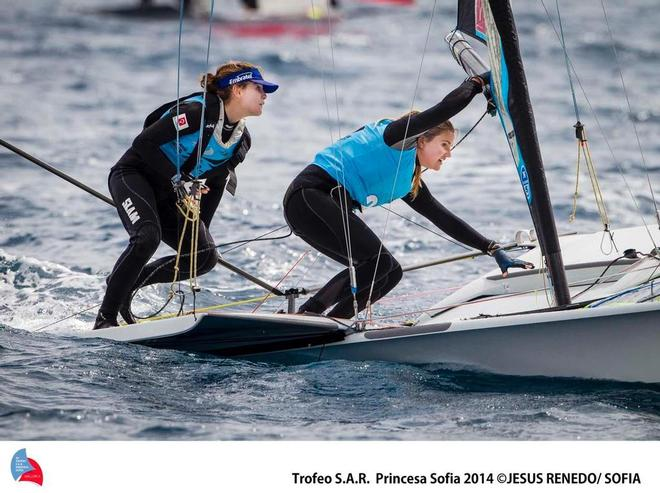 At the ISAF Sailing World Cup Mallorca, Martine Grael (BRA) and Ida Nielsen (DEN) were each looking to win here in Palma with only four points separating them and three 10 minute races to compete.

The first race solved little with Grael pulling an extra two points ahead, and then in one decisive downwind leg, a two minute run, Grael shot from ninth to third, passing the Danes, and sealing her victory! The entire race was an intense affair for Grael, as she was twice prior in great position to seal the victory only to be bounced back in the fleet each time. There was no denying her however, as she and Kahena Kunze claim their first regatta victory of 2014. The races were broadcast live, and the second race is about 1h 44 minutes into the video below.

Charlotte Dobson and Sofie Ainsworth (GBR) sailed a consistent series today to lock up their Bronze medal. This is the second podium performance in a row for the British Sailing Team, but it was team mates Frances Peters and Nicola Groves in Miami. The duo train together and are able to each other throughout their training.

Palma finally delivered the type of weather all the sailors came here for as the sky cleared, the sun came out, and the sea breeze formed. There were some delays to the race schedule as the Northerly winds died out making way for the typical westerly winds. The Race Officers and their team did an excellent job re-configuring the course so the racing got under way as soon as the wind allowed.