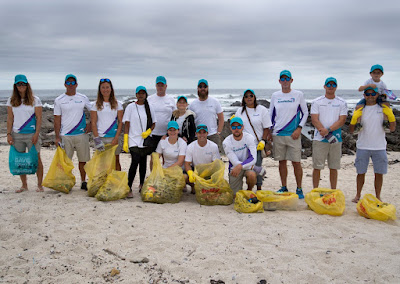 Team AkzoNobel reaffirmed its commitment to protecting the world’s oceans from plastic waste this weekend when members of the sailing team and local AkzoNobel employees joined forces at a beach clean in Cape Town.

During the two-hour clean-up on Saturday December 2 organised by the Two Oceans Aquarium in Cape Town the sailors and AkzoNobel employees collected 11 large bags filled with plastic waste and other man-made rubbish from the beach at Sea Point.

The team AkzoNobel sailors took part in the beach clean on the final day of their recovery period after they arrived in Cape Town from Lisbon a week earlier at the end of three weeks at sea on the second leg of the Volvo Ocean Race around-the-world. 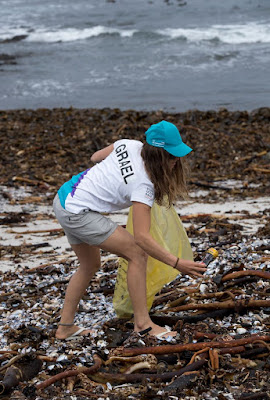 First of the sailors on to the beach with a recyclable refuse sack was team AkzoNobel sail trimmer and passionate environmentalist, Martine Grael, accompanied by her mother Andrea – a veterinarian with lots of experience of the effects of plastic on marine animals.

To the casual glance the beach appeared free of any large items of rubbish, but closer inspection revealed a myriad number of smaller bits of plastic, such as bottle tops, straws, lolly pop sticks, and the stalks from cotton wool ear buds.

“When they end up in the sea things like that are just the size for animals to eat,” Grael explained. “They don’t go through the digestive system so they stay there. Or they end up as micro plastic and get into the food chain that way.”

Team AkzoNobel watch captain Chris Nicholson (AUS) said the problem of plastic in the ocean had been getting steadily worse over his twenty years as an ocean racing yachtsman.

“The beach looks clean from up on the promenade but when you come down here and have a microscopic look, you can see that it is anything but clean,” he said. “It’s always sobering to come and do this sort of thing.” 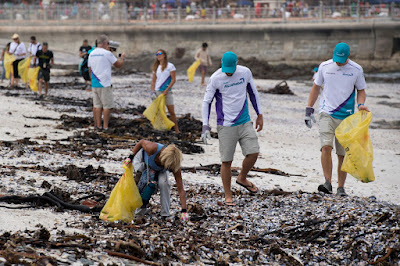 Peter van Niekerk (NED) – a helmsman and trimmer on the team AkzoNobel yacht – filled his bag mainly with plastic items. Some had been in plain view but others, almost hidden by the sand, had to be dug out.

“Here there’s a lot of it – old and new,” Niekerk said ruefully. “What we see out on the ocean when we are racing is pretty sad. On the last leg, every watch we would see at least one item of plastic – and often a lot more.

“Much of it is nets, ropes and buoys, but then you see a Coca Cola bottle out in the South Atlantic and you think: ‘where does it come from and how long has it been in the water?’ Sometimes it is covered in green already.” 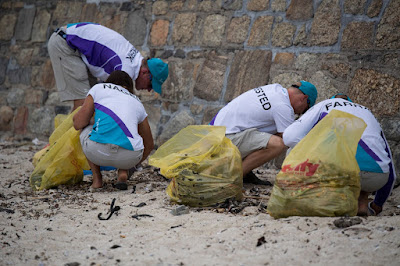 AkzoNobel has partnered with the innovative organisation The Ocean Cleanup on its mission to clear plastic waste from the world’s oceans using large-scale floating booms.

AkzoNobel provides advanced biocide-free coatings technology for all the devices and equipment used in the mission. Additionally, the team AkzoNobel Volvo Ocean 65 racing yacht carries a ‘The Ocean Cleanup’ logo on each side of its hull to help spread awareness around the world of the threat to the seas and oceans and the animals that live in them from the relentless incursion of plastic. 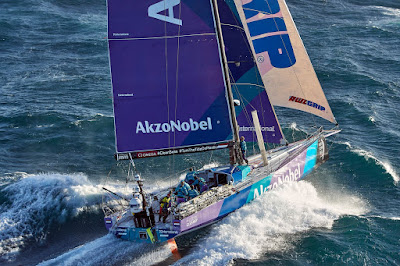 “As sailors, it’s a message that we all feel passionate about being associated with,” said team AkzoNobel navigator Jules Salter (GBR). “Few people directly see the effects of plastic and other ocean pollution more than us.

“The important thing is that the word gets out about the damage being done to the seas and oceans. That’s why we are pleased to display The Ocean Cleanup’s logo on the boat and to be able to get involved with events like today’s beach clean.”