“We’ve seen a lot of wildlife from onboard team AkzoNobel on the first two legs, particularly around the coast of Spain and Portugal,” she explains. “It’s amazing – a lot of whales, dolphins, and monkfish".

“Unfortunately, we also saw a lot of plastic. Even just from a performance point of view, you have to keep an eye on it – we hit a lot of it, and got it caught on the keel".

“I don’t think I went through a single watch without seeing it – even as we raced really south. It was really surprising, and if you see that in the middle of nowhere, imagine what it’s like on the current circles where trash collects.”

The Two Oceans Aquarium isn’t just a collection of some of the ocean’s most beautiful and majestic creatures. It’s also a unique turtle rehabilitation centre – treating injured turtles often washed up on shore and found by the general public.

Plastic pollution is one of the biggest threats to the turtle species – from big pieces of debris like plastic bags and balloons, to almost-invisible micro-plastics – most of the turtles that arrive at the centre are found to have ingested some form of this dangerous and toxic material. 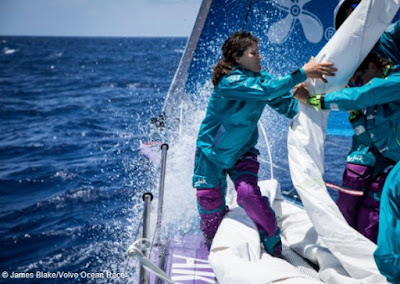 Martine knows all about the extent of the plastic problem in our oceans. Not just a world-class sailor, she hails from a family of sailors (her father, Volvo Ocean Race legend Torben is Brazil’s most successful ever Olympian, whilst her brother Marco and uncle Lars have also raced in the Games).

But it’s her mum – an ecologist – who she says sparked her passion for marine wildlife and conservation.

“My mum is a vet, and she’s very used to dealing with marine wildlife and birds as well,” Martine explains. “She has great experience in that area, and does a lot of environmental education back home, so the problem with plastic is something that we always talk about.

“One of the biggest issues for the turtles is that they normally eat jellyfish, so it’s easy to confuse plastic bags for food. My mum has done a lot of biopsies of turtles and marine wildlife – it’s a bit gross to see, but very interesting, because you see a lot of plastic in their stomachs".


"Once turtles have ingested plastic, they often can’t eat anything else, so they starve". Martine Grael

She adds: “The problem is that once they’ve ingested plastic, they often can’t eat anything else, so they starve.”

Talitha Noble, Two Oceans Aquarium Conservation Coordinator, explains: “We get a whole range of size and species into our Turtle Rehabilitation and Release Programme. When they arrive, they’re always very compromised and weak, so we normally start with an initial period of intensive care".

She continues: “Whenever we get a turtle in, the goal is always to rehabilitate and release – so every interaction we have with the turtle is with that in mind. But while the turtles are in our rehab programme, we have a really unique and cool opportunity to use them for education and as ambassadors for the species".

“As an athlete and a role model, I do feel a responsibility. I’ve noticed that the thing you see a lot is that the people who don’t have contact with nature, don’t tend to care so much. I think it’s a matter of education, and if there’s something I can do to help, then I’ll do it.”

“We bring kids to the aquarium and speak about the turtles’ stories and how our actions impact the creatures in the sea. It’s very tangible conservation to see an animal released back to contribute to wild populations.”

"It’s so hard to see all the plastic that is used, because you know that most of it isn’t going to end up in the right place". Martine Grael


For Martine, that education is key to tackling the growing problem of ocean health – it will be the ‘salvation of the world’, she says.

But she admits that it’s hard not to 'feel like a hypocrite sometimes', with so much plastic and waste around in our daily lives.

“We all want to turn the tide on plastic and encourage people to use more reusable materials, but at the same time we’re all using a lot of it. It’s so hard to see all the plastic that is used, because you know that most of it isn’t going to end up in the right place – and, I mean, what is the right place for plastic? Even if it goes into landfill, there’s still a big problem.”

She adds: “Events like the Volvo Ocean Race have a big footprint, but it’s good that the Race organisers are trying to do a better job and build awareness".