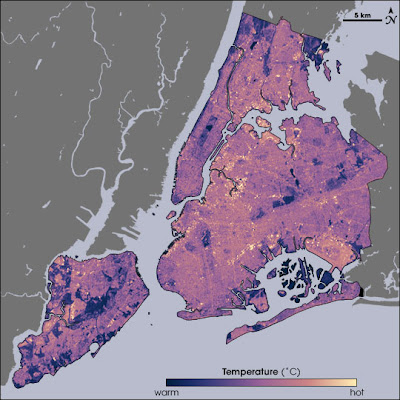 The Effect of Urban Heat Islands

Cities are centers of human and industrial activity. They are also considered commonly centers of urban warmth or heat. Jacobson and Ten Hoeve are authors of a paper describing the research that will be published in Journal of Climate. The paper is available online now. The study modeled climate response from 2005 to 2025. Some global warming skeptics have claimed that the urban heat island effect is so strong that it has been skewing temperature measurements that show that global warming is happening. They have argued that urban areas are a larger contributor to global warming than the greenhouse gases produced by human activity, and thus drastic measures to reduce greenhouse gases are not needed. "This study shows that the urban heat island effect is a relatively minor contributor to warming, contrary to what climate skeptics have claimed," Jacobson said. "Greenhouse gases and particulate black carbon cause far more warming." Prior to Jacobson's study, claims about the importance of heat island to global warming could not be addressed directly. The few previous modeling studies by other researchers that had examined the effect of urban heat islands on regional scales did not calculate global impacts.
An urban heat island (UHI) is a metropolitan area which is significantly warmer than its surrounding rural areas. The phenomenon was first investigated and described by Luke Howard in the 1810s, although he was not the one to name the phenomenon. The temperature difference usually is larger at night than during the day, and is most apparent when winds are weak. Seasonally, UHI is seen during both summer and winter. The main cause of the urban heat island is modification of the land surface by urban development which uses materials which effectively retain heat. Waste heat generated by energy usage is a secondary contributor. As population centers grow they tend to modify a greater and greater area of land and have a corresponding increase in average temperature.

Although the new study showed that urban heat islands are not major contributors to global warming, Jacobson said reducing the effect of heat islands is still important for slowing the rise of global temperatures.

One geoengineering proposal for reducing the impact of urban heat islands is to paint roofs worldwide a reflective white. Jacobson's computer modeling concluded that white roofs did indeed cool urban surfaces. However, they caused a net global warming, largely because they reduced cloudiness slightly by increasing the stability of the air, thereby reducing the vertical transport of moisture and energy to clouds. In Jacobson's modeling, the reduction in cloudiness allowed more sunlight to reach the surface.

The increased sunlight reflected back into the atmosphere by white roofs in turn increased absorption of light by dark pollutants such as black carbon, which further increased heating of the atmosphere.
Jacobson's study did not examine one potential benefit of white roofs — a reduced demand for electricity to run air conditioning in hot weather. But a recent study done at the National Center for Atmospheric Research showed that the decrease in air conditioning use, which occurs mostly in the summer, might be more than offset by increases in heating during winter months.

One way to reduce emissions while simultaneously reducing summer air conditioning demand is to install photovoltaic panels on roofs. Such panels not only generate electricity, reducing emissions of fossil fuels from electricity-producing power plants, but they also reduce sunlight absorbed by buildings because they convert sunlight to electricity. Because photovoltaic panels do not reflect the sunlight back to the air, unlike white roofs, reflected light is not available to be absorbed again by pollutants in the air, creating heat.