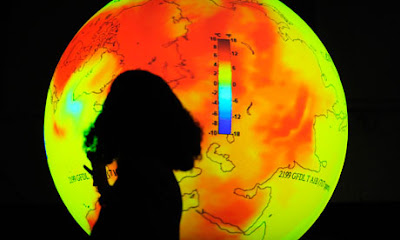 Is climate scepticism a largely Anglo-Saxon phenomenon?
A new study shows that climate sceptics feature much more prominently in the UK and US media than in other countries
Leo Hickman
During a trip to Italy earlier this year, I asked a local journalist whether climate sceptical views get much of an airing in the Italian media. My query was greeted with an air of slight bemusement, which was followed by a request for me to explain what I meant by the term "climate scepticism". Their facial reaction alone told me that this was something of an alien concept to them.
It supported a hunch I have long believed to carry some substance: climate scepticism is a predominantly Anglo-Saxon phenomenon. Or, rather, it is a phenomenon that tends to gets amplified to a much greater extent in the various English-language media outlets around the world – particularly, in the US, UK and Australia - than it does in other languages or countries.
Until now, there has been very little beyond the anecdotal to support this theory. But the proposition is now on a firmer footing thanks to a new report published by the Reuters Institute for the Study of Journalism, based at the University of Oxford, which firms up some related findings it published last year.
In "Poles Apart: The International Reporting of Climate Scepticism", a team of researchers, led by James Painter, a former BBC World Service journalist with a specialism in analysing how climate change is portrayed in the media, conducted a comparative study of the prevalence of climate sceptic voices in the print media across Brazil, China, France, India, the UK and US.
More than 3,000 articles from at least two different newspapers in each country (10 from the UK) were analysed over two separate three-month periods: February to April 2007 and mid-November 2009 to mid-February 2010, the latter including both the Copenhagen summit and fallout from the theft of emails from the University of East Anglia. The "political leaning" of each newspaper (except in China) was also taken into consideration.
The report undertakes the important and necessary task of defining and discussing the various types of climate sceptic – something it later stresses should be better emphasised by journalists. For example, there are the "trend sceptics" (who deny the warming trend), the "attribution sceptics" (who accept the trend, but attribute it to natural causes) and the "impact sceptics" (those who accept human causation, but claim the impacts will be beneficial or benign).
Then there are the policy sceptics; those who, for a variety of (often political or ideological) reasons, disagree with the regulatory policies being promoted to tackle climate change. Then, finally, there are the science sceptics; those who – again, for a variety of reasons - believe climate science not to be trustworthy.
The report also lists four examples of different sceptics - Pat Michaels, Steve McIntyre, Lord Monckton and Bjørn Lomborg – to illustrate their often contrasting motivations and methodologies in expressing their equally various types of scepticism.
Overall, the report (which, sadly, is behind a paywall, but the executive summary can be viewed here as a pdf) performs a very good job of summarising the political leanings of the sceptics and the media outlets that report, host or dismiss their views. It also shows why the flourishing of climate scepticism in the US "is related to the funding of American politicians by industry groups and the pervasive practice and power of lobbying".
With regard to the UK, it lays out how "particularly successful" the Global Warming Policy Foundation (GWPF) has been in getting its voice across most of the 10 surveyed newspapers, showing how the most mentioned or quoted sceptics "by far" were GWPF's Lord Lawson and Benny Peiser. (Ian Plimer, the Australian mining geologist, was the fourth most mentioned (most likely because he was promoting a book in late 2009) who also has links to the GWPF – as does the fifth most mentioned, the Canadian economist Ross McKitrick.)
But all this we knew – or could sensibly conclude ourselves. Where the report offers genuinely new insights is when it compares the coverage of climate scepticism across the six chosen countries. It finds, for example, that the so-called "Climategate" affair received much more attention in the UK and the US compared to Brazil, China, France and India. And it also notes that "significantly more" sceptics are mentioned in the UK and US media compared to the other four countries sampled.
It adds that it "was interesting to note that type (ii) sceptics [those who question the anthropogenic contribution to the warming trend] were much more common in the print media in Brazil, China, India and France, representing 45 out of the 51 times sceptics were quoted or mentioned, or 88%. In the Anglo-Saxon countries, for type (ii) sceptics, the percentage figure was lower (57%)."
Another important contrast between the Anglo-Saxon countries and the other four was that politician sceptics were quoted or included much more in the UK and US media (86%) than in Brazil, China, India and France. The Chinese media mentioned no politician sceptics at all, whereas India and Brazil only mentioned foreign politician sceptics.
The report concludes that one factor that explains the comparative absence of sceptic voices in the media in Brazil, France and India is that there are "no conservative parties, or significant elements within them, who energetically follow that type of conservative ideology whom the (right-leaning) print media can quote".
However, it says there is a danger in "over-stating the role of ideology":

Outcomes are usually determined by the interaction between internal processes or factors within newspapers (such as journalistic practices, editorial culture, or the influence of editors and proprietors as well as political ideology) and external societal forces (such as the power or presence of sceptical lobbying groups, sceptical scientists, sceptical political parties, or sceptical readers who are simply fearful of higher taxes or energy bills). An array of other factors, such as a country's energy profile, the presence of web-based scepticism, and a country's direct experience of a changing climate also play a role.

Lastly, it makes the interesting observation that in France, where, it says, all of the factors above have a possible role, there is also a strong "pro-science", rationalist culture which is "probably an additional prism through which to evaluate the experience of reporting climate change there".
By the author's own admission, the scope and range of the study is limited. It would be interesting to see how climate scepticism is reported in a wider range of other languages – German, Spanish, Japanese, Italian, Arabic, to name just a few. (Please share you own insights and observations below if you speak these, or any other, languages – even though you'll have to relay them in English?!)
But what the study does do is remind those of us who are engaged in the "climate debate" that – for a variety of reasons - it is one that is predominantly Anglo-Saxon. A complicated matrix of cultural, geographical and ideological influences has led climate scepticism to flourish in the UK and the US compared to other places, proving once again that "The Science" often only has a walk-on role.
Fonte: The Guardian
Postado por AXEL SCHMIDT GRAEL às 17:29