RIO DE JANEIRO — The site chosen for the finals of next summer’s Olympic sailing races could not be more spectacular. Located at the mouth of Guanabara Bay, at the foot of Rio de Janeiro’s Sugarloaf Mountain, in full view of the crowds on Flamengo Beach, it is one of the most scenic places on the planet.

But there is one not-so-little problem.

“It is dirty", said Brazilian Olympic windsurfer Ricardo Winicki. “It is one of the dirtiest places. And one of the most beautiful.’’

So notoriously grimy are the waters that Brazilian authorities are fighting to defend their selection of the site, which is polluted with raw sewage and garbage that floods into the 147-square-mile bay from open sewers and rain gullies — according to a 2014 report, 1.6 million homes in cities around the bay still lacked sewage collection.

When a top Brazilian government official recently staged a highly publicized swim to prove that the bay was safe, his televised stunt backfired — cameras on his boat captured scenes of floating garbage. An oceanographer explained that the official — Rio state environment secretary André Corrêa — had selected a point where the incoming tide offered the cleanest conditions in the bay. The pollution problems are just the latest facing Rio’s troubled Olympics.


A year after International Olympic Committee Vice President John Coates slammed late preparations, Rio 2016 is back on schedule but under attack for failing to meet promises to clean up Olympic waters. Work to depollute a noxious lagoon in front of the Olympic Park is held up in a legal dispute, unlikely to be ready for the start of the Games. Officials have admitted that a target to treat 80 percent of the sewage flowing into Guanabara Bay by 2016 will not be met, and garbage-picking “eco-boats” have been suspended pending new bids for the contract.

Three of five Olympic racing lanes are inside the mouth of Guanabara Bay. The other two are in open sea. Debris streaming from the bay regularly streaks the waters of Copacabana Beach, just outside the opening of the bay. Flamengo Beach has been judged safe to swim only four times this year. Critics say successive governments have repeatedly failed for decades to clean up the bay.
The authorities argue that bacteria levels meet government standards and that a ramped-up eco-boat operation and 17 new “eco-barriers” to block garbage on rivers will resolve floating debris problems. A test competition staged last August was hailed as a success. Regattas have always happened here.

“The races are going to happen with the same safety levels we had last year,” said Rio 2016’s Executive Director of Sports Agberto Guimarães, adding that a chemical agent helped clean the sea water. “The photos that we are going to have of the athletes competing in the bay with the Sugarloaf [in the background] are very beautiful.”

But in April, Alastair Fox, head of competitions for the International Sailing Federation, ISAF, the world’s governing body for sailing, told the Associated Press all races could be moved outside the bay if it wasn’t cleaned up.

The organization is worried about water quality and hazardous floating debris that could interfere with a race or injure sailors. “If the bay is polluted and it becomes obvious that the racing will be unsafe and unfair, then we have to consider that. We are dearly hoping that won’t happen,” said Scott Perry, an ISAF vice president and technical director.

More likely is an option to switch a third lane to the open sea. “This is a Plan B,” Perry said. “The organizing committee does not have the power to go there and resolve this problem,” Guimarães said. “If the eco-boats and the eco-barriers don’t work,” he added, “I take the three lanes and put them outside.” 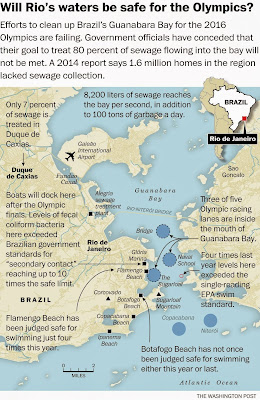 At the test event last August, the right conditions — a South wind and no rain — meant conditions were “perfectly acceptable,” Perry said. A concentrated effort by eco-boats reduced floating garbage. “I saw a window frame that was about two meters by one meter one day, floating,” Perry added. “That was rather scary.” But conditions vary. “If there is a lot of rains and winds from the north, the bay tends to get full of debris,” Perry said.

The highway from Rio’s international airport, Galeão, eight miles inside the bay, roars over the Fundão Canal, past vast favelas; $106 million was spent on a 2009 project that included a road bridge, cleaning up the canal, and planting and recuperating mangrove trees on its banks. On a recent morning, there was little evidence of the cleanup. The canal’s stinking, brown water bubbled with toxic gases. Banks beneath the trees were carpeted with garbage — plastic bottles, yogurt containers, clothes. A sodden, filthy sofa sat near a plastic toilet seat squashed into the dirt.


“The majority of the rivers that arrive in the Guanabara Bay are dead due to the dumping of sewage and the presence of garbage,” said Mario Moscatelli, the biologist responsible for planting the mangrove trees. He pointed to the Alegria sewage-treatment plant on the opposite bank, operating at less than half its capacity. In English, its name means “joy.”

The problem is nationwide: half of the Brazilian population does not have sewage collection, said Édíson Carlos, president of Trata Brasil, a nonprofit organization of sanitation companies that listed sanitation problems in the bay in a 2014 report. In Duque de Caxias, on the bay’s west coast, just 7 percent of sewage is treated. “The conditions of the bay are the result of years and years of lack of investment,” Carlos said.

Rio’s state government said improvements had been made even though it would not meet its target to clean up 80 percent of sewage reaching the bay by 2016. “We went from 11 percent to 49 percent,” said chief of staff Leonardo Espindola after an Olympic Legacy event in late April. “We will have full conditions for all the athletes that come, as it was for the test event last year.”

Brazilian TV reported that 8,200 liters of sewage reaches the bay per second and 100 tons of garbage a day. Rio’s state-controlled water and sanitation company, CEDAE, said it had more than tripled the amount of treated sewage reaching the bay. In the next three years, that number will reach 16,000 liters a second. From 2009 to 2016, the company will have spent $668 million on sewage treatment in the bay.

Yet on a recent afternoon, a pungent effluent of brown water oozed into the bay at the Glória Marina, where boats will dock after the Olympic finals. CEDAE said it will be gone by December. Figures from the Rio state environment institute showed spikes in fecal coliform bacteria, and levels here over 12 months breached Brazilian government standards. Enterococci bacteria levels exceeded an Environmental Protection Agency single-reading standard for “primary contact” four times last year.

“When the water quality becomes dramatically worse the risks are higher,” said Professor Mark Sobsey of the Gillings School of Global Public Health at the University of North Carolina at Chapel Hill when shown the figures. In December, researchers found a “super-bacteria” where a river meets nearby Flamengo Beach.

"In the Glória Marina, the conditions are terrible. We had enough time to make a leap in the environmental quality of the bay. There was a lack of political will and management initiative". Axel Grael


“In the Glória Marina, the conditions are terrible,” said Axel Grael, vice mayor of nearby Niterói and co-founder, with his Olympic medal-winning brothers Torben and Lars, of a nongovernmental organization for sailing and environmental activities. Grael published a detailed report this year on the bay’s water problems. “We had enough time to make a leap in the environmental quality of the bay,” he said by e-mail. “There was a lack of political will and management initiative.”

For many, the failure to clean up the bay is a lost opportunity. “I always believed in the project Rio 2016 as something good for Rio. But the way things happen, the delay in things, the bureaucracy, these things mean that Brazil does not go forward,” said Brazilian Olympic team sailor Isabel Swan, who won a bronze at the 2012 Games. “This is my sadness.”

Dom Phillips is The Post's correspondent in Rio de Janeiro. He has previously written for The Times, Guardian and Sunday Times.