An atlas of pollution: The world in carbon dioxide emissions 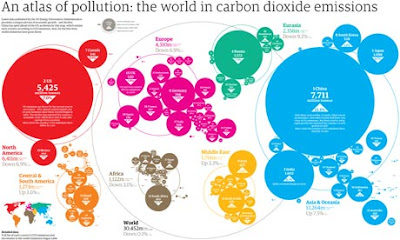 The deepest recession since the 1930s has failed to reverse rising global carbon emissions, as plummeting industrial output in the west was offset by the continuing rapid expansion of China and a handful of other emerging economies, new statistics for 2009 show.


While US emissions fell substantially in 2009, to levels not seen since 1995-96, China surged ahead with an increase of more than 13% on the previous year – the equivalent of adding the yearly emissions of Germany, Greece and Peru combined.

Europe, Russia, Canada and South Africa saw their emissions dip, and India has risen to third place in the league table, with the strong growth in its carbon output driven by a ramping-up of coal burning to generate power.

Overall, by these estimates, global emissions fell by a tiny 0.1%. For short periods in the wake of less severe recessions, such as those in 1981-83, and 1991-92, emissions fell more steeply only to continue their upward trend shortly afterwards.

These statistics, from the US Energy Information Administration, track only carbon dioxide emitted by energy use – such as from coal and gas power stations, and motor vehicles. They exclude emissions from other sources such as methane from livestock, and deforestation.

The map reveals how heavily future emissions trends depend on China, which overtook the US as the world's biggest emitter in 2006-07. China's emissions have so far risen just as fast as its runaway economic growth, but the government is hoping to "decouple" the two in the next decade, reducing the country's emissions per unit of GDP by 40 to 45% by 2020, compared with 2005 levels. Doing so will be essential if global greenhouse gas emissions are to fall in line with scientific warnings.

But green campaigners want to stop western companies using the focus on China and their own falling output as an excuse for backpedalling on climate change. They have urged governments in developed countries to strengthen their emissions targets to prevent businesses from taking what would amount to an "emissions holiday".

According to calculations from Sandbag, the green campaigning group, the impact of the recession on emissions means European Union companies could do nothing more to fight climate change between now and 2016, and still meet their targets of a 20% cut by 2020.

Comparable figures for 2010 will not be compiled for months, but the key question will be whether this recession follows the pattern of all others – a short pause followed by a swift return to the relentless year-on-year emissions increases of the last three decades – or whether this time is different, and the world is genuinely on a path to greener economic growth. With scientists warning that carbon must peak around 2015 to give the world a fighting chance of avoiding dangerous climate change, the next few years will be crucial.

See the data and our carbon atlas in detail