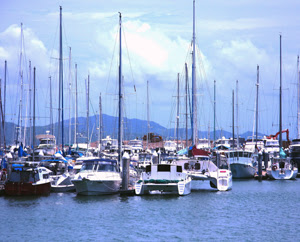 Can one boater make a difference? Consider this: A weekend boater flushing untreated sewage into San Francisco Bay produces the same bacterial pollution as 10,000 people whose sewage passes through a treatment plant.

One marina operator can make a big difference, too. At Sausalito’s Galilee Harbor, a co-op affordable-housing marina owned by its tenants, every boat is connected into the city sewer system. The co-op paid for the dockside sewer hookups and pipes connecting to the main sewer line. Each boat owner paid for the plumbing connections from boat to dockside hookup.

"It took a lot of specialized work, because each boat is configured differently inside," said Doreen Gounard, harbor manager at Galilee. The harbor’s resident plumber helped solve those problems. A revolving loan fund, established with grant money, made the hookups available to tenants unable to afford the expense up-front.

Most Galilee boaters are live-aboards—their boats never leave the harbor. But more than a dozen boats go out regularly, including the Gounard family sailboat. Their sewage lines are fitted with valves that allow them to disconnect and reconnect, easily and without polluting.

Gounard, who is also a San Francisco Baykeeper board member, said the residents are glad they no longer have to walk their waste to a dockside dump station. Plus, the harbor is cleaner. Peer pressure was already keeping anyone at Galilee from flushing human waste directly into the water. But now, gray water from showers and dishwashing also goes to the sewer system, instead of into the marina’s waters.

Salt water does not sterilize the bacteria, viruses and other pathogens contained in sewage. When windsurfers, swimmers, fishermen and others come in contact with water contaminated with sewage, it can cause persistent skin infections and painful stomach disorders. Sewage can also deplete oxygen in the Bay, threatening fish, seals, other sea creatures and plant life.

Now we need a new level of leadership from marina operators and boaters—especially with the America’s Cup races soon to bring boats to the Bay from near and far. It’s illegal for small boats or large ships to discharge treated or untreated sewage in the Bay. But the law is seldom enforced.

Here’s another example of how marina operators can take leadership: At Avalon Harbor on southern California’s Catalina Island, arriving boaters get a brochure explaining that no sewage, treated or untreated, can be discharged. Harbor staff put a dye tablet in every head on the boat, making violations instantly visible. Violators are fined $500 and banned for a year. Since this policy took effect, human-waste bacteria counts at Avalon have declined from 16,000 per 100 ml to 23 per 100 ml!

Marina operators have other options. They can make sure their pump-out stations work properly. Even better, because some boaters don’t want the hassle of going to the pump-out station, operators can require boats to use a mobile pump-out service, and a marina contract with a mobile pump-out service can be a very effective and inexpensive way to get all boats to do the right thing. Moreover, because releasing sewage in a marina is against the law, it’s also a violation of the boater’s lease. The marina operator can tell the boater to stop, assess fines, and even kick out the boater.

There’s another group that can play a leadership role here—responsible boaters. When responsible boaters know another boater is illegally discharging sewage, they don’t mind their own business. The Bay is all of our business. Peer pressure worked at Galilee Harbor, back before they hooked up to main sewage lines. Another approach is urging the marina operator to stop the polluter. Anchor-outs certainly can contribute to the problem as well, and we’re working with various enforcement agencies to ratchet down illegal discharges.

Our state government needs to step up, too. Publications like the California Coastal Commission’s brochure "Environmental Boating Laws: What Every Recreational Boater Should Know" should clearly explain that boaters are required not to dump sewage. Baykeeper will be working with agencies to make those changes before the America’s Cup series begin.

If the maritime community takes leadership now, we can keep sewage out of San Francisco Bay during the America’s Cup races, and leave the Bay Area a lasting legacy of cleaner Bay waters. Follow Baykeeper’s work at http://www.baykeeper.org/ and report pollution by calling 1-800-keep-bay