How A Surge in Visitors Is Overwhelming America’s National Parks

The growing crowds at U.S. National Parks have become unmanageable, jeopardizing the natural experience the parks were created to provide. With attendance this summer continuing to shatter records, officials are considering limiting use of the parks in order to save them.


Zion National Park in southwestern Utah is the poster child for the crowding of America’s most hallowed natural places. With its soaring and magisterial red, dun, and white rock cliffs with grand names such as the Court of the Patriarchs and the Temple of Sinawava, Zion is at the top of the list of the nation’s most dramatic scenery.

It is also small as parks go, just under 150,000 acres and has only one main road, six miles long. Yet Zion gets as many visitors as Yellowstone, more than 4.3 million a year, even though Yellowstone is nearly fifteen times larger.

“In the last few years, this huge uptick in visitation has overwhelmed our infrastructure facilities, our trails, our backcountry, it goes on and on and on,” said John Marciano, a spokesman for Zion. “We can’t sit on our hands anymore. We have to come up with some kind of management plan to be able to preserve resources and to make sure our visitors have a good and safe experience.”

Saving a landscape as a national park is only part of the preservation battle – saving the spirit of these places is also essential. National parks are often thought of as America’s natural cathedrals – serene, contemplative places to visit and be restored by a connection to wild nature and grandeur.


That is impossible in the front country of Zion – and many other national parks – these days. Veteran park administrators are aghast at the “greenlock ” – gridlock in natural surroundings – in marquee national parks like Yosemite, Yellowstone, Grand Canyon, Great Smoky Mountains, and a host of other crown jewels.

Yellowstone, for example, has gone from 2 million visitors in 1980 to more than 4 million last year and is likely to climb higher. There were 2.3 million visitors to the Grand Canyon in 1980. In 2015, attendance broke the 5 million mark. A year later, it broke the 6 million barrier. Glacier, Yosemite, Great Smoky Mountains, Acadia, Rocky Mountain are all smashing records and are overwhelmed with humanity, losing the very thing they were created to provide – a sense of peak naturalness. Managers are concerned that this is the new normal and may get worse.

“Visitors are losing in this mix of 5 and 6 million people trying to cram into places that are busy when it’s 2 or 3 million,” said Joan Anzelmo, a retired Park Service superintendent who lives near Grand Teton National Park in Wyoming and is active as a volunteer in efforts to mitigate the impacts of visitation outside Grand Teton and Yellowstone. “These are irreplaceable resources. We have to protect them by putting some strategic limits on numbers, or there won’t be anything left. Nobody will want to visit them. Everyone I know who lives, works, and is involved in these issues says something has to be done, it can’t go on like this anymore.”

"This crowding of the parks comes at an uncertain time, as President Trump has proposed cutting the Park Service budget by 13 percent".

If these were not national parks, the solution would be to keep building more infrastructure. But the National Park Service has a dual mandate from Congress: to “provide for the enjoyment in such manner and by such means as will leave them unimpaired for the enjoyment of future generations.” Wider roads and more hotels and campgrounds would only create sprawl, diminish the experience of nature, and encourage yet more people to come.

This crowding comes at an uncertain time for the parks. President Trump has proposed cutting the Park Service budget by 13 percent (which would be the largest cut to the agency since World War II), and there is already a backlog of staffing and maintenance issues. And there is concern that the Trump Administration might move to make the parks even more friendly to commercial interests that would look bring in more visitors and more development.

The visitor crush is creating two main problems – a steep decline in the quality of visitor experience that a national park is supposed to provide, and damaging impacts on the ecology of these intact natural places.

Zion provides a microcosm of Park Service problems – and perhaps the beginning of a solution. Zion was one of the first parks to deal with the overwhelming crowds by closing the park to traffic and instituting a shuttle bus system in 2000. But the soaring attendance – since then the number of visitors has grown from 2.4 to 4.3 million – has swamped that effort. 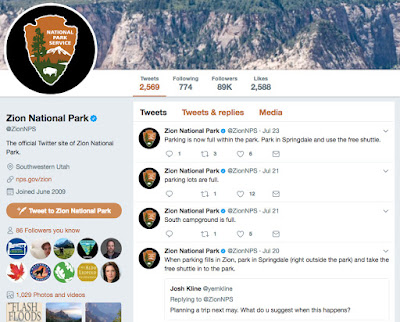 The park now swarms with tens of thousands of people each day, and the season lasts almost all year, instead of 8 or 9 months as previously. Flocks of tour buses pour in from Los Angeles and Las Vegas. Instead of coming to get a sense of nature transcendent, people wait an hour or two in traffic just to get through the park gates, and day hikers jostle with hundreds of other people on one-lane trails eroded by overuse. Trash bins can’t be emptied fast enough and overflow onto the ground. Wild desert waterfalls at the end of a three- or four-mile trail feel less like a red rock cathedral and more like a crowded beach. Lines of vehicles to get a first-come, first-served camping spot start forming at 4:30 or 5 a.m., and many come away empty-handed. Amusement-park-style lines form to get on the shuttle and into restrooms.

In addition to a decline in visitor experience, there is an impact on park ecology. The legendary hike up the Virgin River Narrows, a red rock, steep-walled canyon, is the premier hike in the park. Now hundreds of people a day splash and wade their way up the riverbed into the half-light of the canyon.

All of these feet trample vegetation, aquatic insects, and fish habitat. And there are other problems. “Imagine how bad the human waste issue is in the Narrows when there’s swarms of people like that,” said Zion’s Marciano. “There’s only so many little private areas where you can peel off. Everyone goes in the same place. Human waste is not only a problem in the narrows, it’s everywhere in the front country.”

Ecological problems from the hordes of people abound in many parks. In Yellowstone, for example, a growing number of visitors are walking off boardwalks, making their own trails, throwing stuff into hot springs, or driving off roads and trampling fragile natural areas. Hundreds of people crowd wildlife along the roads, and some animals lose their fear of humans and need to be moved. Wildlife is also displaced by the numbers of people on the trails. And in many areas of the parks, the roar of traffic drowns out the subtle sounds of nature.

Why the boom in visits to national parks? Baby boomers are retiring in droves – every day 7,000 to 10,000 people turn 65 and travel is high on their list. The threat of terrorism in Europe has also kept many people in the United States, experts say.


Many point to unbridled promotion by states where the parks are located. At Zion, many people cite an international promotion by the Utah Office of Tourism called The Road to Mighty, an advertising campaign that urges a visit to the Mighty Five parks spread across southern Utah: Zion, Arches, Canyonlands, Bryce, and Capitol Reef. The campaign shows people hiking, biking and driving through sculptural red rock formations, as soaring music plays. “It’s been wildly successful,” Vicki Varela, director of the Utah Office of Tourism told High Country News. “In Europe, the Mighty Five is now on everyone’s bucket list.”

And bucket lists elsewhere. It’s not uncommon to hear Japanese, Chinese, German, French, and other languages around the breakfast tables at the large new hotels built in rural Utah.

Social media too shoulders some of the blame for overcrowding. “People come to the park, take a crazy selfie with a beautiful backdrop, put it on social media, and then their 100 friends want to go there and do the same thing,” Marciano says. “It cascades.”

An irony not lost on many is the effort by the Utah congressional delegation to undo protection for public lands in the state. Both Grand Staircase-Escalante and Bears Ears national monuments are reviled by Sen. Orrin Hatch and others Utah Republican politicians, and Interior Secretary Ryan Zinke is currently reviewing the status of these monuments to see if they can be rescinded or shrunk.


Many parks are designed to withstand and mitigate the impacts of large numbers of people, says Jeffrey Marion, a recreation ecologist at Virginia Tech, but at a certain point the crowds can no longer be managed. “When you bring people in by the busload, parks have few tools to deal with masses like that other than limiting use. You hate to see them do that, but I think it’s inevitable.”

Is that the answer? Zion is the first park to consider such a solution. Officials there are beginning a series of public meetings aimed at creating a new visitor use management plan. Two of the proposed solutions are requiring a reservation to get into the park and a reservation to go on some of the most prized hikes. A decision is expected in 2018.

Few like the idea, but experts say the time has come. “Parks have been commanded by the Congress to accommodate people and to preserve and protect these places,” said Marion. “It’s a huge management paradox.”

In the end, Marion says, “they have to limit use. We think these parks can handle an infinite number of people, and they can’t.”