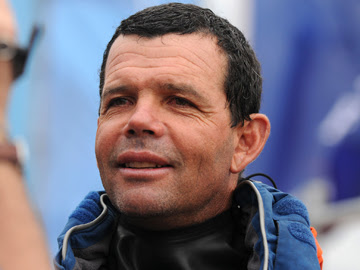 Torben, who boasts an incredible five Olympic medals including two golds, is a fitting leader for a team that is a tribute to Brazil's Olympic medallists and future stars. He will be joined by his son Marco, the next generation of Graels going for glory at the Olympic Games as he campaigns his 49er dinghy for the Rio 2016 Olympic Sailing Competition. Torben's brother, Lars Grael, himself a holder of two Olympic medals, will be coaching Team Brasil and acting as reserve crew, making it a real family affair.

The Grael clan will be joined by sailors of equally impressive stature. Portuguese sailor Diogo Cayolla can list the Olympics, America's Cup and a host of national titles on his CV, as well as previous Extreme 40 experience; whilst Brazilian Alex Welter brings his catamaran expertise into the mix including an Olympic gold medal in the Tornado class. The final crew member André Mirsky brings experience in the Olympic star class and thousands of offshore miles to the fray.

Commenting on his team, Torben said, "For me it's a great pleasure to sail these extreme sailing machines in my home waters. The opportunity to have my brother Lars, a multihull lover, as coach and my son, Marco, as bowman is very nice too. Of course, here in Brazil, we are not sailing to win. We know how hard is to be an Extreme Sailing Series sailor and only hope to have a good time in Guanabara Bay and get our city and country represented in front of the crowd."

For the eight established Extreme 40 teams, the stakes are high with four teams capable of lifting the 2012 Extreme Sailing Series overall trophy - two Omani, one French and one Austrian. None of them want to go home empty handed and with 15 points up for grabs in the final Act, the podium is wide open. One team will head to the final feeling a little more comfortable than the others, safe in the knowledge that they have guaranteed themselves a podium position regardless of the final outcome. Leigh McMillan's The Wave, Muscat has been sitting pretty at the top of the leaderboard since winning Act 2 in Qingdao. However, their leading position is far from guaranteed with three other teams champing at the bit to stop The Wave, Muscat in their tracks.

Act wins in Muscat and Cardiff for Morgan Larson's Oman Air sees them in second place on 53 points, in what has been an impressive debut year on the Extreme Sailing Series for the American skipper. "It feels like my sailing shoes have just dried from the wild sailing in Nice a few weeks ago and now Rio is just around the corner. On Oman Air we are 100% focused on continuing our growth as a team and in the boat. It would take a miracle to win the season so our goal is to perform at our best every race in Rio and see how things unfold from there."

Pierre Pennec put his French team Groupe Edmond de Rothschild back in the fray at the penultimate Act in Nice with a win on home soil, leaving them just two points shy of Larson on 51 while the Austrian Red Bull Sailing Team enter the Act in fourth on 48.5 points. And with 179 races down this year and up to 32 more to come in Rio de Janeiro, Roman Hagara is all too aware of what is at stake. "We are not going to be looking at the other teams and will focus on our own performance. We have analysed our disappointing result from Nice (the team finished in sixth place) and have to fight back in Rio now."

While these four teams will fight for overall victory, another battle has developed mid-fleet. Andrew Walsh is back at the helm of GAC Pindar with a 5 point lead over 2012 Series newbies SAP Extreme Sailing Team and both teams are gunning for their first podium positions. "We have been close to a podium finish at the previous Acts of the Extreme Sailing Series, and we hope that a more consistent performance will take us the last step onto the podium in Rio de Janeiro," explained SAP Extreme Sailing Team's co-skipper Rasmus Kostner.

The action begins on the 6 December in open water in front of Copacabana beach before moving into stadium mode for the final three days where the world famous statue of Christ the Redeemer - one of the New Seven Wonders of the world -will be watching over the Extreme 40s.